My Blog: Welcome to My World

The RNA Summer Party. What else!

Repetition is the enemy of authors; nevertheless, I intend to repeat myself by saying what I’ve said after every RNA party – the RNA knows how to throw a fabulous party! The Summer Party 2016 was no exception, and a terrific time was had by all.

Once again, the party venue was the imposing Royal Overseas League in Park Read more

Afternoon tea? Don’t mind if I do.

I don’t know why, but the words SCONES & CREAM have a way of leaping out at me, wherever they appear. Funny that.

A recent leaping-out was on the invitation extended by the Chelmsford Chapter of the RNA, who’d had the inspired idea of organising an Afternoon Tea, which was to take place in Colchester last Saturday. 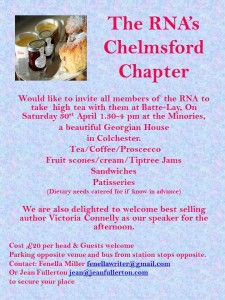 Indian Summers, trailed as lasting for five series, has just been axed while series two is still under way – there’ll be no series three. The initial audience of five million has dropped to one million.  On an advertising channel, such figures were always going to sound the death knell.

So why, despite the money lavished on the Read more