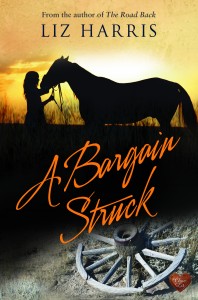 In popular opinion a good marriage was a bargain struck between two strong-willed characters for an equitable and advantageous division of labour.*

In Wyoming Territory, 1887, Connor Maguire, a widower with an eight year old daughter about to start school, needing someone to do the woman’s work on his homestead, advertises for a wife.

Ellen O’Sullivan, a widow living in Omaha, Nebraska, needing to feel part of a home and a family, answers the advertisement.

During their initial exchange of letters, each expected total honesty from the other. Unfortunately, expectations are not always met …

Set beneath the sweeping skies of Wyoming, A Bargain Struck tells the story of a man and a woman brought together through need, not love.

*John Mack Faragher: Men and Women on the Overland Trail, 1979

In addition to studying a wide range of books purchased from both the US and England, and in addition to reading the Wyoming newspapers from the years 1886 and 1887, and to using the many resources on the internet, I was able to do the very best sort of research an author could wish for  – I went to Wyoming, to the area in which I’d set my novel.

However, Wyoming is probably better known throughout the world for being at the heart of the Wild West.  It was through Wyoming that the pioneers in their covered wagons headed west in the mid 1800s, driving along the Overland Trail to the west of Wyoming, where the groups then separated and headed for the promise offered by Oregon, California and Utah.

To encourage the settlement of land in the mid-west, the US Congress passed The Homestead Act 1862, which came into effect on January 1, 1863. This was the first of three Acts designed to give applicants freehold title to 160 acres of undeveloped federal land that lay west of the Mississippi River.

The requirement was that the homesteader had to be head of a family or over the age of twenty-one, and a citizen of the United States or someone who had declared his intention to become a citizen. He could not claim more than 160 acres. In addition to paying $18 in fees, he was obliged to settle upon the land within six months of making the claim, and to live there for a part of each year for a period of five years.  During those five years, the homesteader had to build a home on the land, make improvements and farm the land. At the end of those five years,  he or she had the right to claim full ownership of the land  – that is,  they could ‘prove-up’ the claim.

The life of a homesteader is the background to my novel. Connor Maguire is a second generation homesteader. A widower with a young daughter, he needs a wife to do the work that a woman would do around the farm and that is why he advertises for a wife. Wyoming may well be the Equality State, but in the everyday life of the people in the 1800s, there was a man’s work and there was a woman’s work, and neither did the work of the other, unless, of course, the claim had been staked by a woman alone, which was not uncommon.

I began my research on a ranch in the south of the State, and I then followed Connor’s mail order bride, Ellen, on her journey from the station town of Rawlins to Baggs, 100 miles south of Rawlins.  I did the journey by air-conditioned car; Ellen, of course, did the journey by stagecoach.

I then went east from Baggs to the Savery area, which lies in the shadow of the Sierra Madre mountains. This was where I set the fictional town of Liberty. 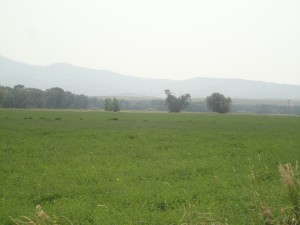 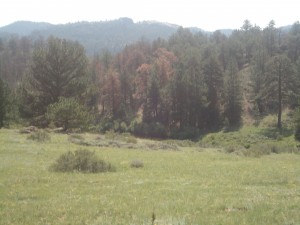 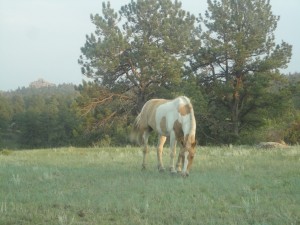 It was a fantastic research trip.  I shall always remember the dramatic scenery I saw, the delightful people I met and the great excitement of discovering the elusive answers to questions that had been plaguing me about the life of homesteaders in Wyoming, 1887.

In every town I drove through, I visited the museum there. I naturally took my camera with me, and although I recognise that I’m not a good photographer and this was not a photographic outing, I thought I would share some moments of the trip with you.

There were some lovely buildings…

… and there were some not so lovely buildings.

The outhouse, which dates from the late 1880s, would eventually be filled in and moved to a different location.  I’d always wondered how they dealt with such matters. A wrangler on the ranch told me.

There was some really beautiful scenery. The State abounds with rivers large and smell, some flanked with lush green grass, some edged with shining white pebbles of various sizes, a scene that I find really attractive.

And there is some not so obviously beautiful scenery. Below is a typical vista of Wyoming. I find an arid scene very attractive, but I recognise that it’s not to everyone’s taste.

Yellowstone, most of which lies in Wyoming, is an area of great beauty. It isn’t an place to walk through unescorted, though, because of the prevalence of bears – grizzly, brown and black. There are ‘Be Bear Aware’ signs everywhere.

I thought Castle Geyser, next to Old Faithful, more interesting than the better known Old Faithful

Leaving Yellowstone by a north eastern exit, it’s a relatively short distance to Cody, one of the most important focal points for my research. Shops, livery stables, a saloon bar, a schoolhouse and houses, all dating from the 1880s, have been carefully transported to Cody and reassembled to form Old Trail Town.

Going to the area in which  A Bargain Struck was set, and asking question after question of the curators in the many museums I visited, and of the wranglers on the ranch where I stayed at the start of my trip, was the perfect way in which to ensure the authenticity of the historical detail in a novel depicting the way in which homesteaders lived in 1887. I feel very lucky to have been able to make such a trip.

A BARGAIN STRUCK was published by Choc Lit in September, 2013