While there’s always a sense of excitement at the start of a new year, at the same time, there’s a tendency towards nostalgia for the year that’s just passed. I decided that in my first blog of 2020, I’d indulge my nostalgia and look back at the some of the events in which I participated towards the end of 2019.

I hope you enjoy these snapshots of my life last autumn, among which you may well feature!

IN SEPTEMBER. I finally made it to a York Tea, and a really enjoyable, if grossly fattening, occasion it was, too, with champagne, scones, jam and cream, sandwiches, cakes and goodies galore. In addition to the tea, the Joan Hessayon Award was announced during the afternoon.

Ever the opportunist, on the way home from my visit to the North, I took advantage of being on the M40 to the north of Banbury, and went to the superb British Motor Museum, which is at Junction 12 of the M40. It’s well worth a visit, and is a must if you’re setting a novel in the 1920s and 1930s.

IN OCTOBER. October began, as my every month begins, with the RNA Oxford Chapter’s lunch, known as the Ox lunch. For the past  15 years, I’ve been the organiser of the Oxford Chapter. On the first Tuesday of every month, we meet – RNA members, and friends who are interested in writing – in The Victoria Arms, Old Marston, for a writerly chat over lunch, and very pleasant it is, too.

Not long after October’s Oxford lunch, I headed for Greece, south of Kalamata. This was later in the year than I usually go there, but I’d been invited to take part in the Mani Literary Festival, which was to be held at the beginning of October. It proved to be a wonderful event – a lively, exciting atmosphere, with input from many different writers, representing many different genres. I took part in five events, and enjoyed every single one of them. Congratulations to Theresa Stoker and Melanie Wicks for their excellent organisation of the festival.

Before leaving Greece, we spent several hours in the amazing ruins of the ancient city of Messini, which are located on a picturesque hillside.

No matter how busy I was, there was always time for a meal. Out of the many meals with friends that I enjoyed last autumn, I’ve singled out the lunch with my very good friends, Charlotte Betts, Barbara Alderton and Carol McGrath. We’ve found a place that all of us can reach with ease – The Deddington Arms – and we try to get together for lunch there every few months. 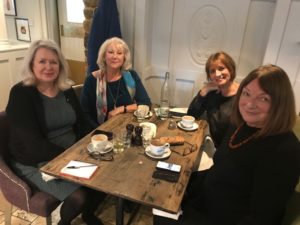 IN NOVEMBER. I love Umbria, and I’ve already set two novels there, Evie Undercover and The Art of Deception. Having been there several times this year, on the last occasion to do some olive-picking, the desire to set a third novel there is stirring within me. Picking olives was hard work, but tremendous fun. A net is spread on the ground and you pull the olives from the branches with your hands, or you shake the branches, using with a long pole with four electric prongs at the end.

After that brief break in my writing-related life, I returned to London to attend a Social Media Course run by the superb Anita Chapman. The aim was to improve one’s interraction on the social media, and the course certainly achieved this in a friendly, most enjoyable way, and with excellent food.

The RNA Winter Party is always one of the year’s highlights, and this year’s party, in the new venue, the Leonardo Royal Hotel in London City, was no disappointment. It was superb.

The London SE Chapter Christmas lunch is another autumn event to which I always look forward, and this year’s surpassed all expectations. We met in The Green Man, next door to Great Portland Street Station, which is the venue now used by the chapter. The lunch was superbly organised by the super-efficient Lucinda Lee, aided by Juliet Archer, who provided the excellent comic entertainment that has become a feature of the Christmas lunch, and a fabulous time was had by all. Many thanks to the chapter organiser, Lucinda Lee, for her hard work throughout the year and her unfailing good humour.

IN DECEMBER. The Reading Chapter Christmas lunch – yes, more food! – took place in Cote, as it’s now done for several years,organised by the very able chapter leader, Julie Roberts. By swapping to a different seat after the main course, we got to chat to almost everyone there.

Since 2012, when my first novel, The Road Back, was published, I’ve got into the habit of signing and selling my novels in Wallingford Market, which is held in St. Mary’s Church. I do this on the last two Saturdays before Christmas. Happily, each year, I’ve had more novels to sell. One of the advantages of going there every year is that I’ve come to know many of the regulars, both those who go to sell and those who go to buy. A considerable number of them have now bought all of my novels, and stop for a chat when they buy the latest novel, which is really pleasant.

FINALLY, to finish the year with a sunset – a sunset in Umbria. I wish you all a very HAPPY NEW YEAR, and all the best for 2020! 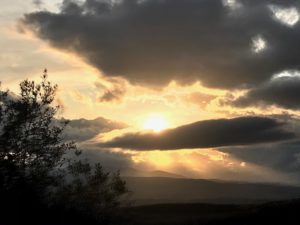