TRUMP TOWER! Blame this blog on a writer’s curiosity.

A writer without any curiosity is like a lock without a key.

Our curiosity about the world around us, about the people we encounter, both those we know and those we don’t, about what might simmer beneath the surface of what we’re told, of what we read, of what we can see for ourselves – fuels our novels. Our curiosity leads us to our central plot and characters, and stimulates the research that will provide the flesh with which to clothe our initial skeletal ideas, and bring our story to vivid life.

My curiosity came into play when I was in New York not so long ago. I’d gone there to research a story line for the first of a series that I’m writing, The Linford Series, and on my final Sunday afternoon, having seen everything that I’d planned to see, a New York friend asked whether I’d like to go to the Guggenheim, the New York Metropolitan Museum, the Museum of Modern Art or to the Frick Collection. 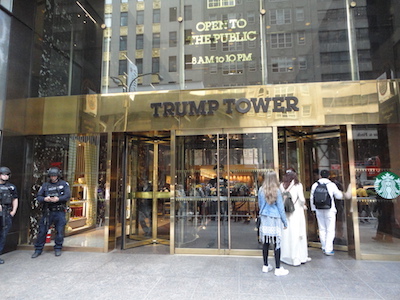 I fear that in that moment I slid to the very bottom of the cultural scale, but I was curious to see the New York residence of a man whose taste ranges from gaud to ultra-bling. Since I’m assuming that some of you might also be curious about the Trump residence in NY, I thought I’d share my photos with you.

I wasn’t the only person who wanted a souvenir photograph taken in front of the entrance. Many had friends, as did I, standing behind the railing, snapping away. 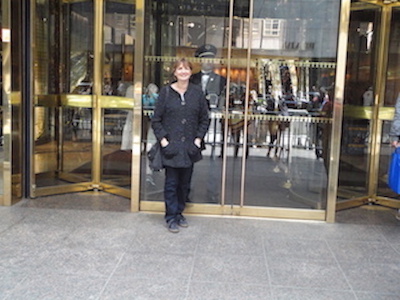 I’d thought that the gold-framed glass doors would be as far as we’d be allowed to go, but not so! To my amazement, we were able to go inside and up to the first floor, so in I went. And look at the very first thing I saw! Yes, STARBUCKS!!! 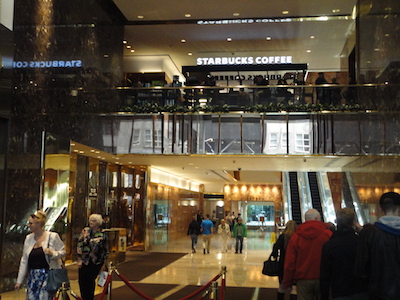 I hadn’t expected that!

But I had expected to see tight security when I stepped across the Trump threshold, but there wasn’t a single guard to be seen. I had a somewhat voluminous bag with me, as you’ll see from the above photo, but no one was checking bags. I just walked straight in.

To get to the Trump Starbucks, visitors take an escalator that rises above, and overlooks, the tables in a large cafeteria below, the walls of which were – of course – the colour of gold. 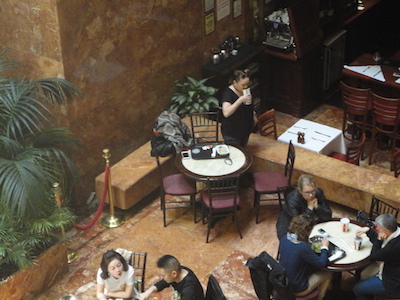 Rivulets of water ran down the back of one of the golden walls, creating a waterfall effect. 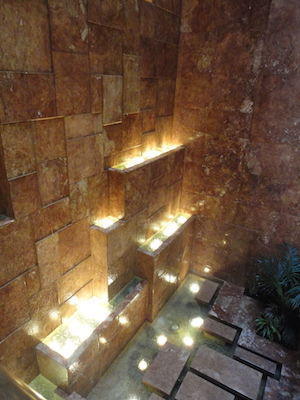 Once at the top of the escalator, never one to walk past a coffee outlet without stopping, I found a seat in Starbucks – with difficulty, I must say, owing to the limited amount of seating.

Disappointed at a total lack of charm or character – this was the worst Starbucks I visited during my stay – I stared back down at the entrance. The security guards were at last in place, I noticed. 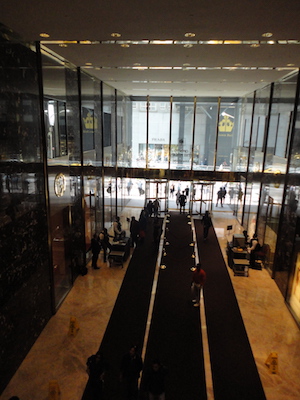 Lest you think Trump, with an unexpected degree of modesty and reserve, was allowing the name of STARBUCKS to dominate the lower part of Trump Tower, I’m afraid I must disabuse you. Everywhere I turned, there was another prominent name – a name that was even more dominant than STARBUCKS, and visible in many more places!

See if you can spot the common denominator in the following three photos. 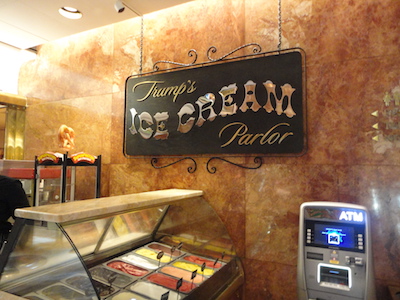 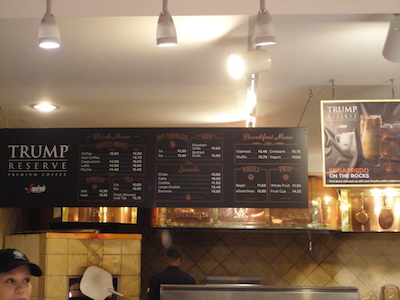 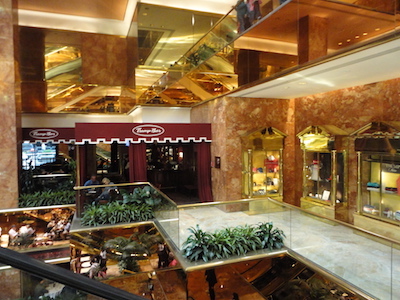 Before leaving the building, I decided to indulge my curiosity in one last area – the ladies’ loos. I’ve seen some amazing loos during my travels over the years, and I thought that the Trump ladies’ loos were bound to be up among the best of them. I imagined that they’d be golden, flower-bedecked and the ultimate in luxury. But was I disappointed! 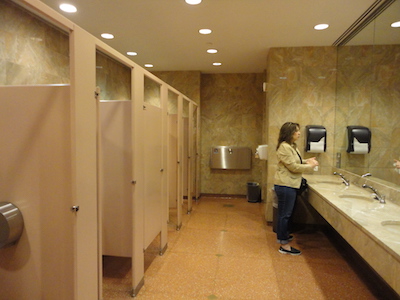 The overall tone was beige, not gold! And there wasn’t a single flower to be seen!!

How dull, I thought, and left the building.

Later that evening, when I returned to the apartment where I was staying, feeling in need of something to erase my memory of the garishness I saw that morning, I looked back at some of the photos I’d taken two days earlier, and in particular, at the photo I took of one of the clusters of sparkling chandeliers that hung above me when I went to the New York Metropolitan Opera House to hear Renee Fleming sing in the wonderful Der Rosenkavalier. 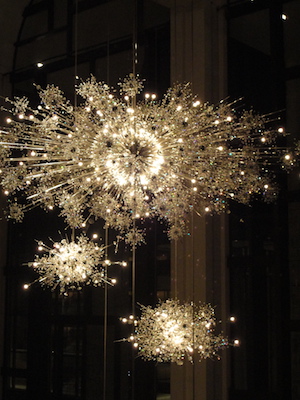 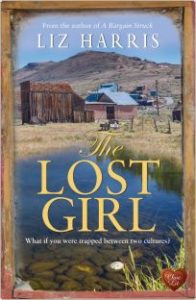