Fragments of the RNA Summer Party 2017

Twice a year – once in the summer and once in the winter – RNA members and friends gather together in the Royal Overseas League in Park Place, off St. James Street, in order to party, and party the RNA certainly does in style! This year’s Summer Party, which took place on the evening of May 18th, was no exception, and as I do every year after the party, I’m posting some of the photos I took during the evening. I very much hope you enjoy looking at them.

When I arrived at the Royal Overseas League a little ahead of the AGM, I repaired to the bar, and whom should I meet there, but …

After the AGM, we headed for the room where the party was to be held. Because I got there before the party was officially due to begin, some of the photos below were taken before the room had filled up. But from the moment we arrived, the fun began.

Apologies that the following two photos are so indistinct. I wasn’t in the best place for seeing last year’s Joan Hessayon Award winner, Clare Harvey, make her speech and congratulate this year’s winner, Kate Field.

I’ll leave the last words with Immi Howson and John Jackson, though I can’t imagine what John can be saying! 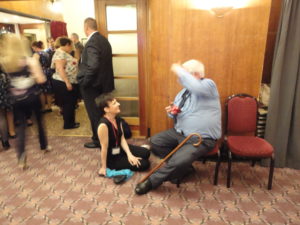