Conversation was lively at the monthly RNA Oxford lunch last week, as it always is, but I found one topic particularly interesting. This may have something to do with the fact that I initiated the topic! It was about what was fair to the reader and what wasn’t. 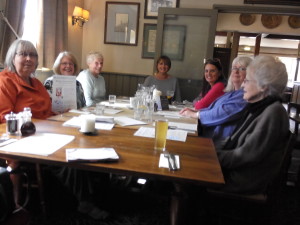 Caught by the camera while waiting for others to arrive, Barbara Hudson, Heather Rosser, Maggi Fox, me, Jean Fullerton, Janet Gover, Mary Nuttall

I remarked that I’d been very disappointed at the end of the thriller I’d finished the night before, Broken Promise, written by one of my favourite authors, Linwood Barclay, as I hadn’t found the conclusion a satisfactory one.

I’m always gripped by Linwood Barclay’s novels, and Broken Promise was no exception. Slightly unusually, though, there were two main story lines. I’d predicted the ending of one of the story lines, and when I finished the book, I was pleased to discover that my prediction had been correct.

I also had ideas about the second main thread in the novel, and wanted to know if I was right, but when I reached the final page, I found that the thread had been deliberately left open. Instead of a satisfactory conclusion to this story line, too, the reader was given a chapter from the opening of what was going to be the second in the series.

I hadn’t realised that Broken Promise was the first of a series, the Promise Falls Series, but even if I had, I don’t think I’d have been any less disappointed as I expect every novel that I read to be complete in itself.

In the ensuing discussion, I quoted the Montana Sky Series Novels written by Debra Holland, several of which I’ve read, and said that each story in the series was satisfactorily rounded off, even though each contained a hook within it that intrigued the reader about a subsidiary character.

But that subsidiary character isn’t part of the main story line, so the fact that their story isn’t developed or resolved doesn’t stop the novel from reaching a satisfactory conclusion. Nevertheless, the reader is intrigued about what happened to that other character and, needless to say, that other character’s story is the next in the series.

In our discussion, I realised that I was the only one at the table who felt strongly cheated at the end of a series book if I found that I had to buy the second book in order to conclude a story line started in the first, and I’m curious to know if others feel as I do.

Does anyone else feel as I do?