Everyone else is doing it, so why shouldn’t I?

Everyone else is doing it, I thought, so why shouldn’t I?

By ‘everyone’, I mean the TV and newspapers. They’re now full of highlights from 2016, and as I’ve enjoyed watching/reading them, I’ve decided to do the same myself. It’s been a wonderful, very crowded, year, but I’m going to limit myself to one memory for each month, and to just a photo or two for each.

Where better to begin than in …

For the past eleven years, I’ve been running the Oxford Chapter of the RNA, which mainly means organising a lunch at The Victoria Arms, Old Marston, on the first Tuesday of every month. I agree, not exactly demanding! It seemed appropriate, therefore, when looking back at the year, that my first entry should be something I’ve done twelve times in the past year, and the photo below was taken at The Vicky Arms while the first arrivals were waiting for the others to get there.

With memories of my fabulous retreat the year before in France in wonderful Chez Castillon, I jumped at the suggestion made by Rosie Dean that I join her and Cara Cooper in a retreat in Kent, and in February the three of us met up at The Seekers, where we spent several superb days. We each had a little guest cottage, and worked there until the evening, when we downed tools and went off to a pub/restaurant for an evening of food, laughter and writerly conversation. Not to mention the odd G&T!

I did a number of talks this past year, and was on several panels. All have been really enjoyable, and I could have highlighted any of them; however, I’ve chosen to highlight a Hertfordshire Literary Festival event in March in which I participated – a Romantic Afternoon Tea. Janet Gover, Jean Fullerton and I formed the panel, after which there was tea and cake, and time to talk to those who’d come to the event. It was a really lovely afternoon, and we were told that this was the largest turnout during the Lit Fest for an adult event.

Never one to miss a social event unless it was completely impossible to make it, the moment I heard about a tea to be hosted by the Chelmsford Chapter in Colchester in April, I knew that it’d be a perfect occasion on which to meet those who lived on the other side of the country. Scones, cakes and fizz, served up in a lovely place full of RNA friends – it sounded the ideal way to spend an afternoon, and I instantly emailed organiser Fenella Jane Miller and booked myself a place.

The tea, which was held in the historic Grade 11 listed building, The Minories, which stands across from Colchester Castle, exceeded all expectations, and a marvellous time was had by all.

May is always the month of the RNA Summer Party, and 2016 was no exception. The party was held in the Royal Over-Seas League, in Park Place, London, which is off St. James’s Street, and was a sell-out. No one gives a party like the RNA!

At the beginning of June, the Oxford Chapter lunch moved to a different venue – temporarily! It was shortly to be the birthday of Anita Burgh, who’d for years been a pillar of the Oxford Chapter. Annie had moved away from the area earlier in the year, so we decided to take the lunch to her in this, her birthday week. The sun shone on what was an extremely enjoyable day.

I always go to Umbria, in Italy, in July, to a 14th century house on the side of a mountain just outside a small Roman town. For the most part, the Italians who live in this very beautiful area don’t speak English, and I started to learn Italian so that I can talk to them. Alas, though, since being published, I’ve not done any more Italian, with the result that I’m slowly forgetting what I knew. That cannot be allowed to continue, and I intend to brush up the language before I go there next July. My novel, EVIE UNDERCOVER, was inspired by the house – it was wonderful setting a story (a contemporary rom com) in a place I know so well.

THE LOST GIRL was released in paperback in August so this has to be my event for the month. There were several write-ups in the newspapers, and I gave a number of talks at the time, including going on Radio Marlow to talk about writing the novel.

I was a member of the HNS committee, which helped the overall organiser, Carol McGrath, with the conference, which was held in the Maths Institute, Oxford. The conference was a sell-out, and included a large number of visitors from the US. Among the many brilliant speakers were Tracy Chevalier, Melvyn Bragg, Fay Weldon and Kate Williams. I was very lucky to be invited to be on a panel, entitled Far and Away, with Karen Maitland and Laura Morelli.

After all the work on the conference, what better to do than go on a writing retreat in North Wales with writer friends? And that was what I did.

By the end of both the conference and the retreat, I was ready for a different sort of break – the sort you have in the sun by the sea – and it was off to Crete I went.

At the end of October, I met up for the first time with someone I’d been friendly with for a couple of years on twitter – Carol Hedges. Carol and I had been saying for a while that we really must meet, and in the end we finally did so, meeting for a coffee in Caravan, near King’s Cross. It just shows that twitter and Facebook can be a great way of making new friends.

By now, you may be wondering if I ever get down to writing a novel! Happily, I do! For the past year, I’ve been back in 1930, living in my head with three families, each of whom lives on a tea plantation on the outskirts of Darjeeling. THE SECOND LEAF tells their stories. From the two photos below, I think you’ll agree that it’s a pretty stunning place in which to live, even if it is only in one’s head. 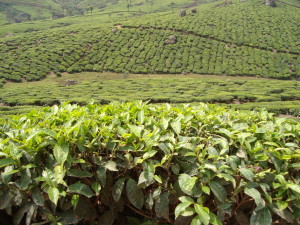 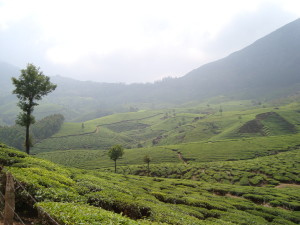 Although I go to the Ox lunches and to some of the Reading lunches, I also occasionally go to a SE Chapter meeting in London. Even if I’m unable to attend any of their meetings throughout the year, I always seem to manage to get to the Christmas lunch. Funny that! Last December was no exception, and we had a really pleasant time in the Sir John Balcombe, near Marylebone, which is now the venue for the meetings.

FINALLY, it’s been a really lovely year, a year full of creativity and friendship. I’m never more aware of how lucky I am that I belong to a writing community than when I sit in my sitting room at the end of the year, surrounded by lights and cards. With each card representing a friend or friends, many of them writer friends, or a member of my family, it’s as if I’m surrounded by friendship.

I wish each and every one of you a very happy, healthy New Year. May your 2017 be filled with the warmth of friendship.

22 thoughts on “Everyone else is doing it, so why shouldn’t I?”