The changed face of The Lost Girl

Not literally, of course! No, Charity Walker is still 100% Chinese and looks it. Her Chinese heritage lies at the heart of the novel. But she’s going out into the world of paperbacks with a different face.

When The Lost Girl comes out as a paperback on 7th August, it will do so with a different cover. The striking cover for the digital version, which came out at the end of last year, did not transfer well to the paperback, so a new cover was born, a cover full of the atmosphere of the West.

Allow me to introduce the changed face of 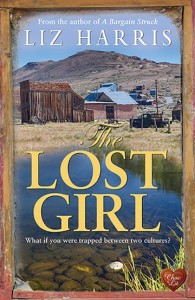 What if you were trapped between two cultures?

Life is tough in 1870s Wyoming. But it’s tougher still when you’re a girl who looks Chinese but speaks like an American.

Orphaned as a baby and taken in by an American family, Charity Walker knows this only too well.  The mounting tensions between the new Chinese immigrants and the locals in the mining town of Carter see her shunned by both communities.

When Charity’s one friend, Joe, leaves town, she finds herself isolated. However, in his absence, a new friendship with the only other Chinese girl in Carter makes her feel like she finally belongs somewhere.

But, for a lost girl like Charity, finding a place to call home was never going to be that easy …

I found this a fascinating period of American history, about which I’d known nothing until I stumbled upon it by chance, and I loved writing the novel. I’m thrilled that readers are saying that they, too, were caught up in the story, characters and events. If you would like to see what the readers are saying on Amazon, click here.

20 thoughts on “The changed face of The Lost Girl”